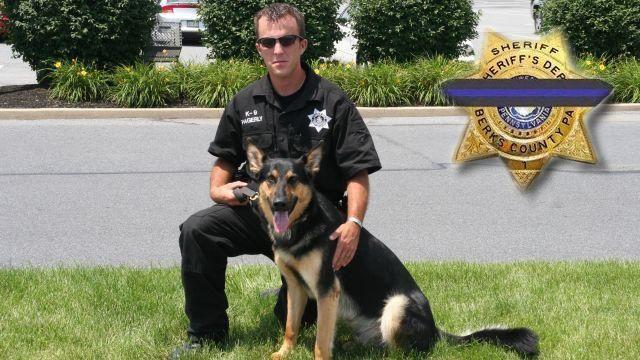 This morning, just after posting about K9 Jynx's passing, a long time supporter of the K9HPP reached out and wanted to see what could be done to get Jynx painted for the Pagerly family.
For those who don't know the story behind K9 Jynx:
On June 29, 2011, K9 Jynx and his handler Deputy Kyle Pagerly were among a task force consisting of county, state and federal officers that were trying to arrest a criminal who had shot at his family several days earlier. A shootout ensued and Deputy Pagerly was struck. K9 Jynx was able to drag his handler to safety, but sadly, Deputy Kyle Pagerly later died from his wounds at the hospital.

In 2012, K9 Jynx stood side by side with our first hero, MWD Gabe K153, at the American Humane Association Hero Dog Awards and won his category for Law Enforcement Hero. Those who contacted me this morning feel Jynx deserves a tribute painting for his family, so we're going to make it so.

We are allowing anyone who'd like to contribute towards sponsoring K9 Jynx's tribute painting but only for a short amount of time. We have three supporters ready to help, and their names will be on the plaque that will be presented to the Pagerly family as well written on the back of a museum quality canvas print (Like the ones used for my museum exhibition of military heroes), that will be getting donated to the Berks County Sheriff's Department.

We will be accepting donations towards Jynx's tribute painting until February 29th, 2020 so that his painting may be started shortly after.

​As always, THANK YOU for supporting what we do here at The K9 Hero Portrait Project.  Bringing home another hero on canvas to the family who lost him.

Below is a PayPal link that will indicate your sponsorship is specifically for K9 Jynx and not another K9 in the queue for The K9 Hero Portrait Project.  At this time I have no other platform to receive donations that will target one specific K9, although, you can email me at Loreen@k9heroportraitproject.org to let me know you used Razoo, Facebook or any other platform to donate if you prefer not to use PayPal.  You an also mail sponsorship to The K9 Hero Portrait Project 137 Hyview Road Stillwater, PA  17878