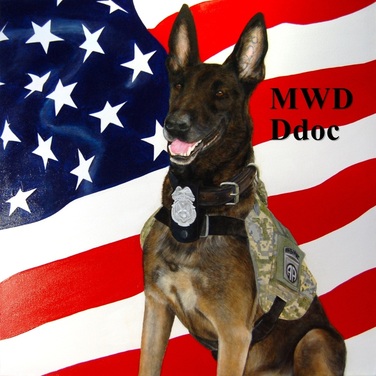 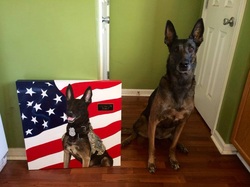 MWD Ddoc L258 was born and trained out of Lackland AFB, hence the double first letter of his name.   MWD Ddoc deployed several times out of Fort Bragg, NC with multiple units including being a part of a Special Operations Forces team as a Patrol Explosives Detection Dog and deployed to Iraq and Afghanistan. During his last deployment to Afghanistan he and his handler found 14 IED's saving numerous Soldiers.


In October 2012 Ddoc and his handler were on patrol with their squad when they were hit by a mortar round which sent them several feet into the air. Upon landing, Ddoc's handler landed on him, giving him temporary muscle damage to his right rear leg. After the explosion, Ddoc's handler continued to return fire while trying to comfort Ddoc who was terrified by the experience. Upon returning to the forward operating base, Ddoc continued to show signs of stress, fear, and anxiety. He was pulled him from the active line and was taken back to the main base to rest. Ddoc would work, but he would fail to alert to explosives. Obviously he was not reliable on patrol and was given time off to try and recuperate from the stress.


Even after some much needed rest, Ddoc continued to fail at alerting to explosives and became panicked when around more than a few people.  Since detecting is crucial and Ddoc was no longer able to work, he was pulled from the program.

Ddoc was adopted to a family but unfortunately the situation was not suitable due to Ddoc's issue with noise and more than a few people, so Ddoc was up for adoption again.  This time, Ddoc's story was seen by a handler who had experience and recognized symptoms of C-PTSD (Canine PTSD). The same day the two met, Ddoc was on his way to a new home with a family who would spend their time helping Ddoc rebuild his confidence and eventually be happy in all situations and surroundings.

MWD Ddoc L258 is also the very first canine in The K9 Hero Portrait Project that is "test-driving" a new therapeutic calming coat: The Rein Coat.  This patent pending coat and harness is designed much differently than other so-called "calming coats".  The Rein Coat works by simulating the effect of the mother dog picking up the pup with acupressure at the back of the dog's neck, releasing the natural calming hormone, oxytocin.   So far, Ddoc has shown great improvements in stressful environments including in front of his own home which normally would send him in to a frenzy and also in a pet store.


We are monitoring Ddoc's progress very closely with the use of The Rein Coat since The K9 Hero Portrait Project hears quite often about returning Veteran K9 Heroes who are experiencing PTSD related symptoms.  This coat can reduce those symptoms without the use of medications.


MWD Ddoc L258's Canine PTSD also drove his adoptive owner to partner and create Combat Canines: The Ddoc Foundation.  An organization who's mission statement is "Giving Our Four Legged Veterans the Recognition and Retirement They Deserve".


To learn more about The Rein Coat, please visit their website at The Rein Coat, LLC.  If you have a Veteran military dog that is experiencing PTSD symptoms and are interested in possibly getting a harness custom made, please contact us directly as we are partnering with The Rein Coat to try and help K9 Veterans.

MWD Ddoc L258 has several items in the Etsy store offered for sale.  Please browse the store and see items for other K9 (and equine!), heroes we have.  All proceeds help cover the costs of future portraits and fundraising endeavors The K9 Hero Portrait does for soldiers, handlers, and the adoptive families of K9 Heroes.   https://www.etsy.com/shop/K9HeroPortraitProjec

Would you help The K9 Hero Portrait Project spread the word about this amazing hero?  You can copy this qr code and either send it to friends and family, or send in an email to yourself and print and display at your office or school (please ask the school or office manager, etc for permission first).  This code is specific to MWD Ddoc 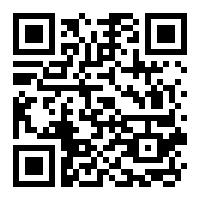