Portrait of K9 Diesel, killed in Paris, Presented in Washington, D.C. at the French Embassy

WASHINGTON, D.C., December 12 - The K9 Hero Portrait Project, a 501(c)(3) Non Profit organization that provides large paintings of fallen K9 officers to law enforcement and military handlers, has presented a portrait of the first fallen Police K9 of France at the Embassy of France in Washington, D.C.  K9 Diesel, a member of the special operations unit "RAID" in France, was killed during the siege in Saint Denis on November 18th, just days after the November 13th attacks that shocked the Paris area and killing 130 innocent people.

Loreen Pantaleone, founder and artist behind the project, was contacted in May by Police Attache' to France, Pierre-Edouard Colliex, who had seen many of Loreen's paintings and wanted to discuss if she would 'paint a gift for France'.   After many communications and 237 hours of painting the portrait, "Diesel" was ready to be presented and go home to France.

On December 12th, Loreen was invited to attend and present at the Police Attache's annual reception that celebrates the partnership between French and U.S. police forces.  After the Embassy Choir performed the two countries' national anthems and short speeches from both Colliex and Pantaleone, the "gift for France" painting of fallen K9 Diesel was presented with a short tribute video about Diesel and how the portrait was created.

Loreen Pantaleone has over 20 years experience as an artist and has presented forty-four paintings in The K9 Hero Portrait Project, including one equine.  One of the portrait presentations of a fallen police k9 was held at the Canton Museum of Art in Canton, Ohio, which is how the French Embassy became aware of Loreen's program.

The painting will be transported to France to be formally presented to Diesel's handler. 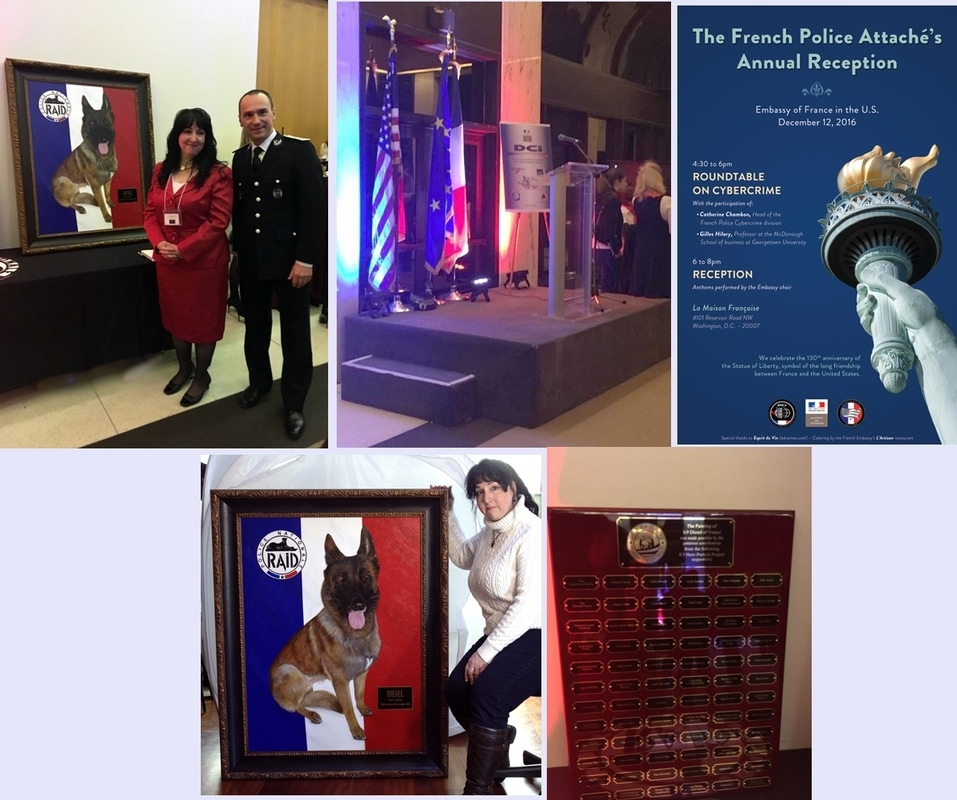 "They say a picture is worth a 1000 words well this painting is worth a million memories. Again. Thank you so so much."  (R) Sgt. Brian Riddle

Short Bio
Loreen Pantaleone  has been painting animal portraiture since 1997 in Bucks County Pennsylvania and quickly became known as “The Artist who captures pets spirits in her work”.  In early 2013, after a series of tragic injuries and deaths took the lives of several K9’s in just one week, Loreen quit her job in the financial industry, moved to the mountaints and founded The K9 Hero Portrait Project.